As Americans, we are guaranteed certain freedoms and rights by the Constitution of the United States and, in Florida, the Constitution of the State of Florida. Guardianship is a complex situation that removes these rights from individuals who have been determined incapacitated by a court. It is a process that is not taken lightly.

There is a procedure that must be followed to determine whether an adult person lacks the capacity to care for themselves safely, including obtaining health care, food, shelter, clothing, and maintaining personal hygiene. A court can find that someone lacks the capacity to do all or some of those tasks. First, the process starts with identifying the alleged incapacitated person through a petition to the court.

Who Can File a Petition for Incapacity?

Within the petition, the next of kin, if any, are listed by name, relationship, and address. They will be served the Petition to Determine Incapacity once it has been filed. The alleged incapacitated person and the attorney for that person are also served with the petition. The petition will include the time and place of the incapacity hearing. 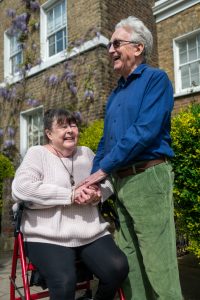 Who Decides a Person is Incapacitated?

After the Petition to Determine Incapacity is filed, the Court must assign an examining committee within 5 days to evaluate the alleged incapacitated person’s mental health and physical state. The examining committee is made up of three members, at least one of whom must be a psychiatrist or other physician. They each have 15 days to complete their examination and file a report of their findings.

What Happens at an Incapacity Hearing?

A judge will hear evidence from the petitioner at the evidentiary hearing to determine incapacity. The evidence of incapacity must be “clear and convincing.” The Court will only impose guardianship if there are no other less restrictive options to address the problems of the incapacitated person.

At any hearing, someone who has been alleged incapacitated still has rights to be respected. Additionally, they have the right to attend their own hearings and take part in the proceedings.

Right to refuse to testify without being held in contempt

Have an open or closed hearing as they chose

What is a Ward?

When a person is determined to need guardianship, the letters of guardianship will designate them as a “ward.” The term applies to a person whom the court has declared legally incapacitated and has had some or all their rights removed.

Are There Different Types of Guardianship?

The Court can determine that the alleged incapacitated person is still able to exercise certain rights. In this case, the guardian will perform only those rights the ward is incapable of exercising, as outlined in the letters of guardianship from the Court. A guardian must be appointed at the same time a Court adjudicates a person as being incapacitated.

Plenary – exercises all delegable rights and powers of the incapacitated person Who Can Be a Guardian?

In Florida, any resident of the State of Florida who is 18 years old and any non-resident who is related to the ward by blood, marriage, or legal adoption may be a guardian. However, someone who has been convicted of a felony or who is incapable of fulfilling the duties of a guardian cannot serve as a guardian. If an incapacitated person doesn’t have a family member that is willing or able, they can be appointed a public or professional guardian.

What Does a Guardian Do?

A guardian exercises the rights that have been removed from the ward on their behalf. They get to know their ward to the best of their ability and create a detailed plan for their welfare that must be submitted to the Court every year. If the guardian is given authority over property, they assume financial responsibility for the ward’s support and file detailed annual reports to the Court. However, certain financial transactions will require the Court’s approval prior to the guardian taking action.

Is a Guardian Held Accountable?

A guardian must be represented by an “attorney of record” and required to furnish a bond. The reports on their ward are reviewed by the clerk of the court every year and presented to the Court for approval. If a guardian is found to be neglecting their duties to their ward, they can be removed by the Court.

If the ward recovers in whole or in part from the condition that caused them to be incapacitated, a petition can be filed to restore the ward’s rights. In the case of progressive cognitive decline, this may not be likely but there are scenarios where a ward recovers. In such a case, the Court would have the ward re-examined to determine if all or some of their rights should be restored.

How Much Does Guardianship Cost?

Financially, the guardianship process can be costly. Emotionally it can take a toll as well. Currently, court fees range between $400 – 800 with additional costs for the examining committee and attorneys. The cost of attorneys can range upwards to over $10,000 depending on the complexity of the case. These costs are generally paid from the property of the ward. However, if the Court determines a petitioner filed a Petition for Incapacity in bad faith, they could be on the hook for all court and attorney costs.

Are There Ways to Avoid Guardianship?

Establish a Durable Power of Attorney

Create and fund a living trust Guardians have a difficult and important job. They are people who have been brought into difficult situations, often with limited information, to find a resolution that satisfies everyone. A seemingly impossible task, and yet they still show up.

Professional guardians understand their responsibilities and strive to uphold both their legal and fiduciary duties based on their extensive training and experience. For many, being a guardian isn’t just their business, it’s their calling. And they spend most of their waking hours tending to the needs of others.

That is one reason why Guardians are one of the Resources We Love. Learn more about Guardians and their important contributions in the Legal and Financial Section of our Blog.

View all posts by: Kara